You've by now no doubt heard about New York Times columnist Paul Krugman's malicious bit of blog-borne 9/11 slander, published yesterday on his NYT blog page entitled "Conscience of a Liberal."  If you have not, here it is (with only a slight formatting alteration to more accurately portray the author): 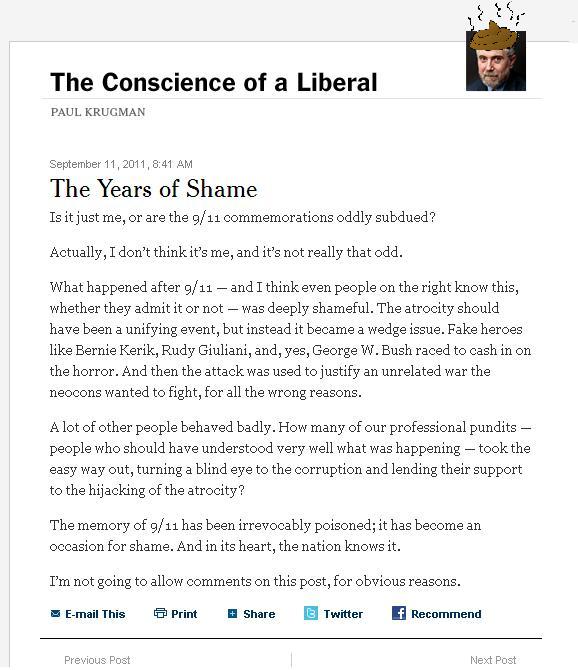 Unlike a lot of my friends, I could care less that Krugman declined to allow comments, "for obvious reasons."  And inasmuch as I suspect that he puked this out there into the ethersphere specifically to get attention and elicit response, I hesitate to add to the cacophony that has very predictably ensued.  On the "substance" of Krugman's remarks – what little of it there is – I do not have anything to add that better (and wittier) bloggers than I haven't already said (see, e.g., Michelle Malkin).  My reaction is pretty much summed up by Ed Morrissey at HotAir (h/t NRO's Jim Geraghty):

I don’t have a problem with political debate on anniversaries of 9/11.   The fact that we’re free to do so is a reason for celebration.  That’s  one reason I find it hard to get worked up over this blog post, but the  other is that it’s such a lousy piece of writing.  It’s nothing Krugman  wouldn’t say (and probably does say) the other 364 days out of  the year, and Krugman says it in pretty much the same vacuous manner of  the everyday sufferers of Bush Derangement Syndrome.  After reading  this, you seriously have to remind yourself that the New York Times pays Krugman  to write it; this wouldn’t even pass muster for a Letter to the Editor  at most newspapers.  It’s so trite, sad, and cliched that it’s hardly  worth the effort to rebut.

In other words, Paul Krugman has as much right to his opinion – vile, ignorant and wildly inappropriate (especially in its timing) though it is – as does anyone else.  God Bless America.  And the New York Times has every right to give the man an international platform.  I'm told some people actually enjoy his rantings.  But the NYT doesn't have to give him that platform.  The free country thing cuts that way too.