“With all due respect,” the Gov isn’t being straight about his gaming relationships.

When is a policy not really a policy? Perhaps when one makes no effort to enforce said policy and continues to take actions that violate that policy, even in the face of evidence that the policy is not being followed. This appears to be the case with Governor Patrick’s supposed campaign policy of not accepting contributions from lobbyists and others associated with the gaming industry.

Last week during his occasional radio appearance on WTTK, the Governor insisted once again that he is careful to avoid any appearance of being influenced by either side of the gaming debate, explicitly saying, “I don’t take contributions from gaming interests. I haven’t engaged with any of the gaming lobbyists.”  There’s no room for ambiguity there.  “I don’t.”  “I haven’t.”

The Massachusetts Republican Party quickly called foul on this claim, digging up several thousands of dollars of contributions from the gaming industry. This morning, the Boston Globe followed up with a story revealing even more violations of Patrick’s alleged policy. Not only has he “collected $6,200 in campaign donations from more than 20 registered gambling lobbyists since 2009,” but a slot-machine lobbyist threw a fundraiser for Patrick last year and Patrick’s top political advisor, Doug Rubin, is a registered lobbyist for a gaming company.

Now, as Patrick so patronizingly told the Globe, “With all due respect, I don’t count every check.” Well, of course not. But Patrick has said repeatedly, in no uncertain terms, that he does not do the things that he has in fact been doing. That this self-imposed restriction is a policy of his campaign. So has he not properly explained that to his campaign staff, are they deliberately violating his policy, or are they not very good at their jobs?  And if he’s going to go on the radio and toss around those unequivocal “I don’ts” and “I haven’ts,” should he touch base with the people who do “count every check”? 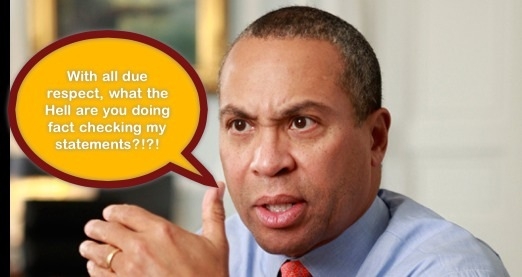 Always willing to give the benefit of the doubt, I was curious as to whether these gaming interests and lobbyists were somehow disguising their donations, sneaking them past the watchful eyes of the Governor’s campaign staff. So I went to our trusty friend, the OCPF database and looked up the contributions for Paul Tuttle, CEO of Suffolk Downs (noted in both the MassGOP release and the Globe story). Up came his donations to Patrick, listing his occupation as CEO and his employer as Suffolk Downs. Seems pretty clear to me.

Not to mention, it would be one thing if this is the first time this had happened, but it’s not. Last October, the Herald caught the Governor in the same… misstatement. If Patrick’s policy had been unclear to his campaign staff before then, Patrick should have made it crystal clear to them after he was called out on it. Which returns us to the question, are his staff incompetent, are they ignoring the Governor’s wishes, or did Patrick not lay down the law with them?  I ask that question “with all due respect,” of course… READ THE REST at CriticalMASS