Truth: A “novel defense” (another patronage scandal a’ brewin’)

It is front page news, but a lot of Globe readers will skip past today’s above-the-fold article titled “Review ordered of liquor agency.”  Sounds like a yawner.  If you missed it, give it a read.  It is much more interesting than the title implies.

The article starts with some run-of-the-mill budgetary excess:


The Alcoholic Beverages Control Commission has spent an amount nearly equal to its annual budget in the past two years to resolve a trio of employment cases involving harassment, discrimination, and retaliation, according to interviews and documents obtained by the Globe through public records requests.  The cases – two settlements and a court judgment – stem from complaints filed by former workers and a prospective employee over the past decade.

Okay, so yet another state agency is burning through taxpayer dollars like kindling at a camp out.  Blow me over. But that’s not the really fun part of this article.  That comes next:


In one case, settled in 2009, the agency presented a novel defense to accusations it had unfairly denied a 57-year-old veteran a job. The defense: The two available slots had to go to relatives of lawmakers, or the Legislature would not fund the positions, according to legal documents. 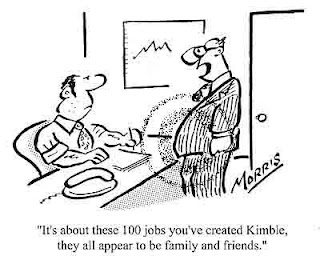 One can imagine the agita that birthed that bit of legal strategy.  Forced to choose between allowing the agency to be credibly painted as ageist/anti-veteran or opening the blinds to let some light in on yet another state government patronage haven, the decision-makers at ABC went with the latter.  They couldn’t hire a vet to fill either of two open positions, you see, because they needed those slots to trade to the Legislature for state funding.

The article is a little light on details – which lawmakers?  Which relatives?  One hopes for and expects a follow-up story or two… READ THE REST at CriticalMASS

Previous: Promises, Promises
Next: The Giving Pledge – Have you joined yet?