It is infuriating when something big happens in the public arena, something like yesterday’s conviction of former Speaker Sal DiMasi, and elected officials stiff-arm the press with a terse “no comment.” 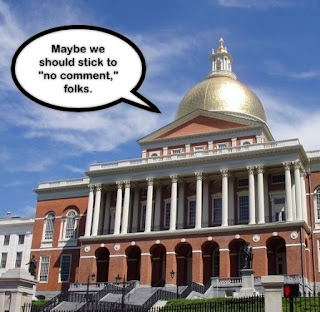 But yesterday on Beacon Hill, a number of Democratic lawmakers convincingly demonstrated why sometimes “no comment” is the way to go.  Cornered by persistent reporters, they got ornery and said some mind-numbingly stupid things.

Let’s start with the Globe’s re-cap of Beacon Hill’s reaction:


House lawmakers seemed to act as if nothing out of the ordinary had happened, cheering floor speeches and congratulating one another for passing bills, even as former speaker Salvatore F. DiMasi, , a North End Democrat, became their third consecutive House leader guilty of a federal felony.

Many legislators dodged reporters, dashing into the chamber and, on their way out, scurrying away through side exits that allowed them the buffer of a velvet rope.

Public moments of introspection were few.

Some of those who spoke insisted that DiMasi’s conviction had little to do with them or the workings of state government. None offered any regret that they reelected DiMasi speaker before his indictment, but after stories in the Globe flagged some of his behavior. Most of them rejected the notion put forth yesterday by US Attorney Carmen M. Ortiz that “the culture of corruption on the Hill has been dealt another blow.”

I suppose it is understandable that the Democratic machine would reject that notion.  After all, the felony convictions of DiMasi’s two predecessors don’t seem to have made all that much of a “dent” in the Beacon Hill culture.  But that casual mention of the overwhelming vote taken by House Democrats to reelect Sal to the Speaker’s chair in January 2009 is interesting.

To me, that vote is at least as damning of the institution and the party that controls it as the fact that three Speakers in a row have left office by way of a felony conviction.  It is no exaggeration to say that the facts under which the jury yesterday convicted DiMasi of seven counts, including fraud and extortion, were pretty much out there in the public arena, thanks to front page Globe coverage, when the Democratic caucus voted nearly unanimously to give Sal another term.  That vote included every newly-elected freshman rep, and – perhaps more to the point – virtually every member of current House leadership.

Unsurprisingly, yesterday some of DiMasi’s former colleagues were particularly prickly when asked about that vote.  Here’s Rep. Charles Murphy, Majority Whip, to the State House News:


Murphy also pushed back against critics, including opponents during the last election cycle, who have tried to use incumbents’ votes to elect DiMasi speaker against them.

“That’s a criticism I never have agreed with. When Sal DiMasi got reelected as speaker and I voted for Sal DiMasi the only thing that anybody had on him, quote or unquote, was a couple of articles in (the Boston Globe) and allegations from people, so if people suggest that I should be dictated to as to how I should vote whether it be for speaker, or legislation or whatever the case may be based on a newspaper article, well, you’re talking to the wrong guy because I make my own decisions,” Murphy said.

Yeah.  And in January 2009 Murphy and his colleagues made ‘their own decisions’ with their palms pressed firmly into their ears, yelling “La La La I can’t hear you!”

Comments got even worse… READ THE REST at CriticalMASS … And more thoughts on Sal, and today’s Globe editorial, by clicking here

Previous: Guilty pleasure!
Next: Prioritizing the Budget During the Great Recession