This weekend during a commencement address at Lasell College, Senator Scott Brown had the temerity (the nerve! the absolute GALL!) to voice the obvious fact that Beacon Hill under monolithic Democratic rule is suffused with a “go along to get along” attitude that has created a “culture of corruption” in state government. 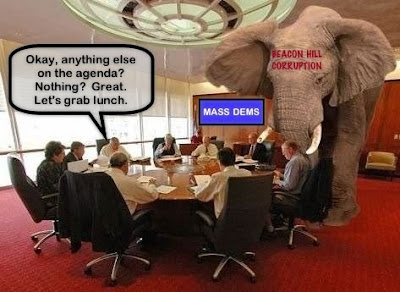 The Democrats’ reaction was fun to watch.  From the Herald: “‘This is a guy who’s starting to see – with his recent missteps – the  erosion of his invulnerability as a candidate. That’s what this is  about,’ said Democratic strategist Michael Goldman.”  Okay…

Or… maybe it’s about the huge hole blown in Beacon Hill’s cesspool by the ongoing Sal DiMasi trial, through which vast quantities of political sludge and slag are flowing into the street for all to see and smell?

“I don’t think corruption is a partisan issue. It’s very bipartisan …  despite what the senator says,” opined former Democratic State Committee Chair Phil Johnston.  And he’s right!  In most places and times, political corruption is very much a bipartisan phenomenon.  It tends to arise along with the disproportionate aggregation of power in a single, insular faction.  It just so happens that in this time and place, total political power is concentrated in the Democrats.  That was Senator Brown’s point.  Johnston should be thanked for helping to illustrate it.

Johnston’s successor, John Walsh, was even more dismissive.  “Scott Brown wants to talk about anything other than what he’s doing in Washington,” Walsh said. “Anything to change the topic.”  Cute, but with the DiMasi trial popping Beacon Hill’s zits all over the front pages day after day, it isn’t we Republicans who are desperate to change the subject just now.

The Democrats’ ineptitude is understandable; it has been a while since the most popular politician in Massachusetts was a Republican.  You’d probably have to go back to Bill Weld.  But come on.  This is one of those times when the better part of wisdom and valor would be for the Democrats to agree with their adversary.  As much as they wish people would quit saying it, Sal DiMasi is the third House Speaker in a row to find himself on the wrong side of an indictment.  No other state can match that streak.  None comes close.  It’s ridiculous.

By refusing to acknowledge that big, fat elephant sitting in the corner of their living room, the Democrats only compound their difficulties… READ THE REST at CriticalMass