Obama To Sentence All To Community Service

It didn’t take long for Obama and his cohorts to move on dismantling the freedom individuals have in life. liberty, and the pursuit of happiness.  Devalbelieves in paying volunteers, but Obama wants to mandate community service. 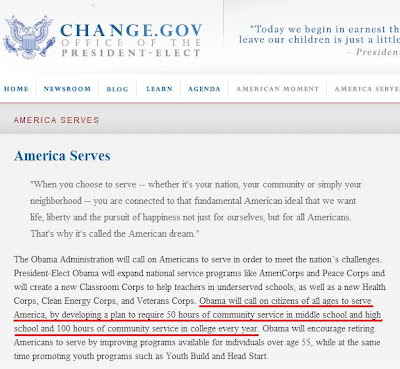 Mandatory community service? Sounds just a bit dictatorial to me.

Time was when America’s creed could be summed up pretty well by the words of the 18th-century revolutionary Patrick Henry, whose reply in 1775 to the oppressive ways of British colonial rule was: “Give me liberty, or give me death.”

In the American system built around that creed, the monstrous original failing and contradiction was the institution of slavery. America paid for that with a civil war, followed by another century in which, finally–about the time of Obama’s childhood–segregation and discrimination began to give way to the equality and opportunities that Obama has now surfed to the presidency. Liberty prevailed.

The irony is that Obama arrives at the threshold of the White House steeped in ideas that subordinate individual freedom to the collective. In his campaign and his victory speech, Obama declares that America’s “timeless creed” is now, “yes, we can.” This is not a defense of liberty. It is a declaration so malleable and generic that it could have applied to anything from Lenin’s Bolshevik Revolution to the Little Engine that Could.

Any wonder firearms sales are skyrocketing?

Previous: 2012 Poll
Next: Numbers don’t lie. This was THE WORST year to run as a Republican.