The New York Times is reporting on a classified standing order, put in place by then Sec. of Defense Donald Rumsfeld, which has allowed our special operations forces to pursue Al Qaeda and other militants where they operate regardless of their location. This has resulted in numerous successful operations against thee terror networks around the world.

These operations, which were approved by the Bush administration, and our relations with the countries where the operations took place are now in jeopardy.  Naturally, this information, as all previous classified information, was obtained through anonymous sources. FOX News reported:

The U.S. military has conducted nearly a dozen secret operations against Al Qaeda and other terrorist groups in Syria, Pakistan and other countries since 2004, The New York Times reported Sunday night.

Citing anonymous U.S. officials, the Times story said the operations were authorized by a broad classified order that then-Defense Secretary Donald H. Rumsfeld signed and President George W. Bush approved in spring 2004. The order gave the military authority to attack Al Qaeda anywhere in the world and to conduct operations in countries that were not at war with the U.S.

One such operation was an Oct. 26 raid inside Syria, the Times reported. Washington has not formally acknowledged the raid, but U.S. officials have said the target was a top Al Qaeda in Iraq figure. Syria has asked for proof and said eight civilians were killed in the attack.

In another mission, in 2006, Navy SEALs raided a suspected terrorist compound in Pakistan’s tribal areas.

The raids have typically been conducted by U.S. Special Forces, often in conjunction with the Central Intelligence Agency, the newspaper said. Even though the process has been streamlined, specific missions have to be approved by the defense secretary or, in the cases of Syria and Pakistan, by the president.

The NYT, in its quest to discredit the Bush administration, once again places it’s agenda ahead of national security and the safety of our men and women in uniform. This endless breach of classified information needs to end, and those responsible need to be prosecuted to the fullest extent of the law. 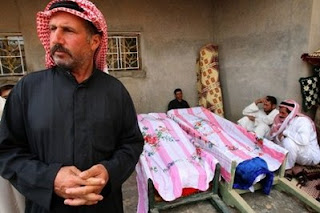 Syrians mourn next the bodies of their relatives who were killed on October 26, 2008, in what the Syrian media reported as a deadly US military attack on the village of Sukkiraya, on the Syria-Iraq border. Iraq has said the deadly raid was targeting an area used by insurgents plotting attacks on its soil, as Damascus protested about what it branded a cold-blooded war crime by US forces. (AFP/Ramzi Haidar)