(Barney “head in sand” Frank.  I knew a crisis was in the making in 2002 when I didn’t take a job with Ameriquest because I found out they were giving loans to people who couldn’t afford it.  Governor Deval Patrick and his pals got us into this mess.  Sane people tried to avoid it, now the left is blaming the sane people. – promoted by EaBo Clipper) 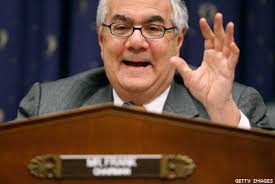 Five years ago the Bush Administration attempted to head off a financial crisis that loomed ahead for Freddie Mac and Fannie Mae. As reported by the New York Times on September 11, 2003:

The Bush administration today recommended the most significant regulatory overhaul in the housing finance industry since the savings and loan crisis a decade ago.

Under the plan, disclosed at a Congressional hearing today, a new agency would be created within the Treasury Department to assume supervision of Fannie Mae and Freddie Mac, the government-sponsored companies that are the two largest players in the mortgage lending industry.

The new agency would have the authority, which now rests with Congress, to set one of the two capital-reserve requirements for the companies. It would exercise authority over any new lines of business. And it would determine whether the two are adequately managing the risks of their ballooning portfolios.

The plan is an acknowledgment by the administration that oversight of Fannie Mae and Freddie Mac – which together have issued more than $1.5 trillion in outstanding debt – is broken. A report by outside investigators in July concluded that Freddie Mac manipulated its accounting to mislead investors, and critics have said Fannie Mae does not adequately hedge against rising interest rates.

However, it was Congressional Democrats who fought tooth and nail to kill this new oversight.

Among the groups denouncing the proposal today were the National Association of Home Builders and Congressional Democrats who fear that tighter regulation of the companies could sharply reduce their commitment to financing low-income and affordable housing.

“These two entities – Fannie Mae and Freddie Mac – are not facing any kind of financial crisis,” said Representative Barney Frank of Massachusetts, the ranking Democrat on the Financial Services Committee. “The more people exaggerate these problems, the more pressure there is on these companies, the less we will see in terms of affordable housing.”

Representative Melvin L. Watt, Democrat of North Carolina, agreed.” I don’t see much other than a shell game going on here, moving something from one agency to another and in the process weakening the bargaining power of poorer families and their ability to get affordable housing,” Mr. Watt said.

Investor’s Business Daily digs deeper into the Democrats contributions to this latest crisis.

Obama in a statement yesterday blamed the shocking new round of subprime-related bankruptcies on the free-market system, and specifically the “trickle-down” economics of the Bush administration, which he tried to gig opponent John McCain for wanting to extend.

But it was the Clinton administration, obsessed with multiculturalism, that dictated where mortgage lenders could lend, and originally helped create the market for the high-risk subprime loans now infecting like a retrovirus the balance sheets of many of Wall Street’s most revered institutions.

Tough new regulations forced lenders into high-risk areas where they had no choice but to lower lending standards to make the loans that sound business practices had previously guarded against making. It was either that or face stiff government penalties.

The untold story in this whole national crisis is that President Clinton put on steroids the Community Redevelopment Act, a well-intended Carter-era law designed to encourage minority homeownership. And in so doing, he helped create the market for the risky subprime loans that he and Democrats now decry as not only greedy but “predatory.”

Yes, the market was fueled by greed and overleveraging in the secondary market for subprimes, vis-a-vis mortgaged-backed securities traded on Wall Street. But the seed was planted in the ’90s by Clinton and his social engineers. They were the political catalyst behind this slow-motion financial train wreck.

And the worst is far from over. By the time it is, we’ll all be paying for Clinton’s social experiment, one that Obama hopes to trump with a whole new round of meddling in the housing and jobs markets. In fact, the social experiment Obama has planned could dwarf both the Great Society and New Deal in size and scope.

There’s a political root cause to this mess that we ignore at our peril. If we blame the wrong culprits, we’ll learn the wrong lessons. And taxpayers will be on the hook for even larger bailouts down the road.

But the government-can-do-no-wrong crowd just doesn’t get it. They won’t acknowledge the law of unintended consequences from well meaning, if misguided, acts.

The Bush Administration must shoulder some of the blame, but clearly it was the Democrats bad policies and social engineering that are the root causes. They denied President Bush the opportunity to head off the problem and now want to shift the blame back to his administration

Previous: 66 year old ‘has been’ star of the 60’s & 70’s Streisand to headline
Next: A Survivor Challenges Obama, Makes A Fool Of Alan Colmes